Taiz, a human rights report announced by the mothers of the abductees reveals brutal torture methods against the abductees 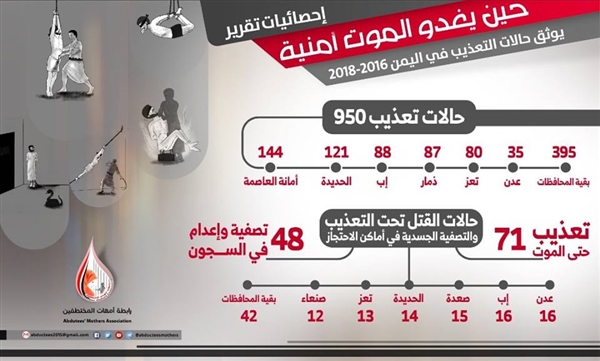 In a press conference held this morning in Taiz Governorate under the slogan “When death becomes a desideratum”, the Association of Mothers of the Abductees announced its first qualitative report on torture and its crimes in Yemen.

At the conference, Mrs. Asmaa al-Raei, Director of the Office of the Association of Mothers of the Abductees in Taiz Governorate, presented a summary of the report covering the governorates of Sana'a, Aden, Hodeidah, Hadramout, Amran, Ibb, Taiz, Dhamar and Saada. The report mentions cases of torture of abductees, forcibly disappeared and arbitrarily detained, which documented by the Monitoring Group of the Association of Mothers of the Abductees. The number of cases monitored was about 950 cases of torture, most of which were in the Municipality of the capital which came in the first rank among the governorates with about 144 cases, Hodeidah governorate came in second rank with about 121 cases, Ibb with about 88 cases, Dhamar with about 87 cases, Taiz governorate with about 80 and Aden with about 35 cases, and the rest of the cases were distributed among the other governorates.

The number of incidents reported by witnesses in the report reached about 30 incidents, two cases of arbitrary detention of women, and 11 incidents of martyrs killed under torture.

In its report, the Association said that it received numerous of reports and appeals from the city of Aden, where the mothers of the forcibly disappeared suffer a great deal of suffering, and who were not supported in the search for their sons in the military formations supported by the Arab Alliance. The Association has carried out and participated in more than 20 protests took place in Aden without surrender or despair.

The report also relied on documenting cases of torture that could be monitored and documented by the Association's Monitoring Group by interviewing the released victims and hearing directly about the torture they were subjected to during their abduction and disappearance.

The report also added that the Association had received messages leaked secretly by the abductees describing the methods of torture they are subjected to. The report also included photographs of some of the abductees' letters and the testimonies of their families.

In their press conference, mothers affirmed that torture is one of the most horrible and most egregious violations committed by the human being because these violations make the victim loses his or her human, dignity and right to life. Therefore, the heavenly religions, the statutes, the international conventions and treaties, agreed to ban these crimes and considering them as war crimes and crimes against humanity.

At the end of the report, the mothers sent recommendations to the President of the Republic, his Deputy, and the Yemeni Government, the UN Envoy, the Human Rights Council, the International Commissions of Inquiry, the National Commission to Investigate Human Rights Violations and local and international organizations working in the field of human rights:
1.   Stop all forms of torture in Yemen.
2.   Giving natural human rights to the abductees, arbitrarily detainees and forcibly disappeared.
3.   The trial of perpetrators of kidnapping, disappearing, torture and murder under torture.
4.   Compensation of the torture victims and their families.
5.   Protect the families of the abductees, the arbitrarily detained and forcibly disappeared from assault and extortion.
6.   Protecting the families of those killed under torture from extortion, threats and assault.
7.   Protect complainants, witnesses and human rights defenders.
8.   Support the documentation of cases of torture and murder under torture, both medically and legally, by the neutral medical and legal bodies.
9.   To make punishment in Yemeni law to deter those who perpetrate torture.
10.   Provide psychological and economic care for those who have been released.

For her part, President of the Association of Mothers of the Abductees Mrs. Amat Assalam al-Haj thanked all those attendants and those in solidarity with the issue of the abductees, the forcibly disappeared and the arbitrary detainees, which is considered a humanitarian issue, adding that the report includes all the North and South governorates.

At the press conference, the first deputy of the governorate of Taiz, Dr. Abdelkawi al-Makhlafi, said that the local authority hopes that the abductee's voice will reach the legitimate government, the President Hadi, the United Nations and international organizations, praising all those who come out from these prisons. In conclusion, he thanked the Association of the Mothers of the Abductees for its relentless efforts to release the abductees, the forcibly disappeared and detainees.

The press conference was attended by a number of satellite channels, news websites, journalists, human rights workers, families of the released abductees. 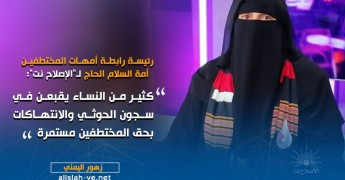